These Are Good Alternatives Foods To Consider If Budget Is Tight!

We want to be totally organic but we all know with the limited organic food available, plus the cost to grow, it can be a bit too pricey for some people. This then requires some creativity in order to maintain a healthy life style.

We are not moving away from being organic but simply making an occasional adjustment for budgetary reasons or otherwise, that will keep us very close to our organic status. This can be very helpful to those who have to travel a lot.  The article below provides some details for those who at times may have to make this adjustment.

Read The Entire Article And Share With Your Friends

Can’t Afford Organic All The Time? No Worries, These 15 Foods Have Virtually No Pesticides!

While many health-conscious shoppers choose to buy organic produce, the reality is that this option isn’t always accessible to everyone.

With organic food often costing significantly more than non-organic food due to production, marketing and distribution costs as well as the limits of supply and demand (according to the Food and Agriculture Organization of the United Nations), many people struggle to buy organic, even if they want to make healthier, ethically sourced food a part of their daily diet.

Enter the Environmental Working Group, an organization which produces an annual report on the state of organic food in North America; their “dirty dozen” and “clean fifteen” lists of foods that are affected most and least by pesticides, respectively, have become a sort of bible for consumers trying to make the healthiest, most sustainable choices when it comes to produce, without breaking the bank.

This year, as in previous years, spinach, kale and collard greens made the Dirty Dozen list, meaning that if you’re going to splurge on organic produce, you should probably focus on organic versions of these popular veggies. Other foods featured on the Dirty Dozen list were apples, cucumbers, bell peppers, and grapes – all foods with relatively thin skins that don’t provide much protection from the harmful effects of pesticides.

Foods That Are Almost Completely Pesticide-Free

By contrast, foods on the “Clean Fifteen” list such as avocados, cantaloupe, eggplant, and grapefruit had relatively low rates of pesticide contamination – so even if you can’t afford to buy organic all the time, you can rest assured knowing that even non-organic versions of these foods are relatively safe to consume. 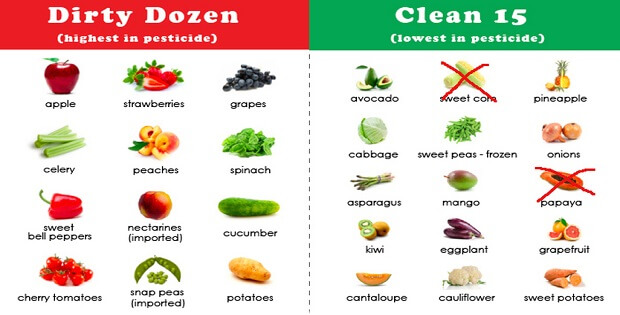 Read the rest of this article at dailyhealthpost.com

Get more gardening updates
in your inbox

Thank you for subscribing.

we respect your privacy and take protecting it seriously